While the Frankfurt Motor Show isn’t until September, Italian manufacturer Ferrari decided not to wait until then to reveal the 2016 488 Spider. As the convertible version of the Ferrari 488 GTB, introduced back in February, the 488 Spider shares the same turbocharged V8 engine as its coupe sibling, offering 661-horsepower and a top speed of 203 mph. With the hard top on, the Spider may also look nearly identical to the coupe, but with its stunning design, that’s far from a bad thing.

Speaking of that hard top, Ferrari says it takes only 14 seconds to put up or down, and it weighs roughly 55 pounds less than a similar soft-top would, an important benefit when remembering that convertibles are often heavier than coupe models due to the mechanics that raise and lower the roof. When down, the roof is completely flush with the engine, making it completely unnoticeable. 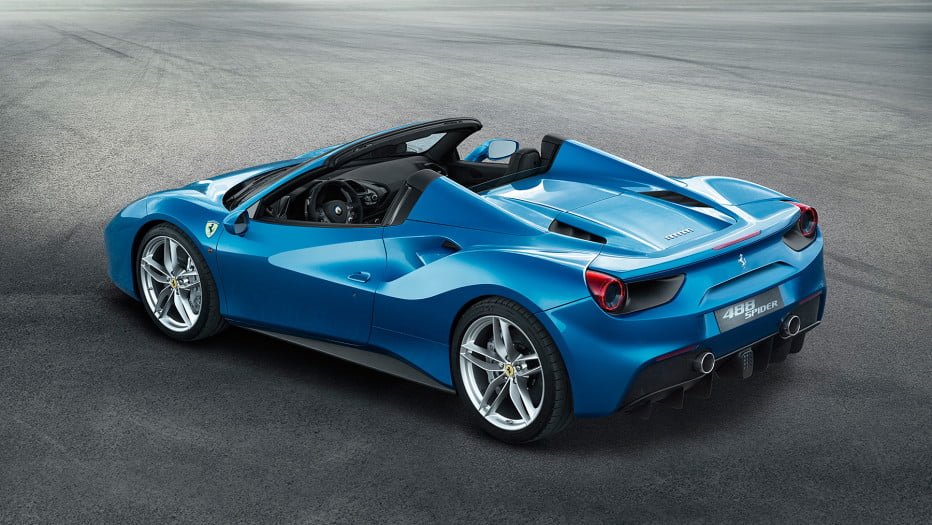 The 488 Spider weighs 3,130 pounds in total, making it just over 100 pounds heavier than the GTB when the top is down. However, it is 22 pounds lighter than Ferrari’s 458 Spider. The company says this is its most aerodynamically efficient convertible model it’s ever produced, no doubt thanks the rear spoiler and large intakes on the sides, which direct air to the engine cover, both also borrowed from the coupe.

While the 203 mph top speed is just a tad shy of the GTB’s, that won’t really be on anyone’s mind when it goes from 0 to 62 mph in just 3 seconds. The one important detail left out by Ferrari is the price, although north of $300,000 should be expected. We’ll find out for sure come September, when Ferrari will give the 488 Spider its public debut at the Frankfurt Motor Show.