Blizzard’s decision to add special abilities to weapons and armour was quietly one of the most exciting updates to Diablo 3. These days the number of legendary, gem and set items you can pack onto a single character is extraordinary. An item can revitalise a long-discarded skill, and make builds that were once useless godlike. These aren’t dry stat bonuses, they’re superpowers.

When my wizard dies, a meteor strikes his body and brings him back to life. When he zaps enemies with his fire beam, they also take catastrophic poison damage. Gold rains from the sky when he gets massacre bonuses, which is all the time. These extraordinary abilities aren’t class characteristics, they’re found in the world attached to green and gold item drops, and embedded on the equip screen. Post-70 existence in Diablo 3 has become a quest to forge the perfect synergistic web of powers.

Patch 2.3 deepens the complexity of these stacking, criss-crossing abilities. Kanai’s Cube, found in the snowy ruins of the new Sescheron area, lets you pull item abilities off legendaries and install them directly to your character. This frees up weapon and armour slots, which means more set bonuses and a more creative approach to character customisation. 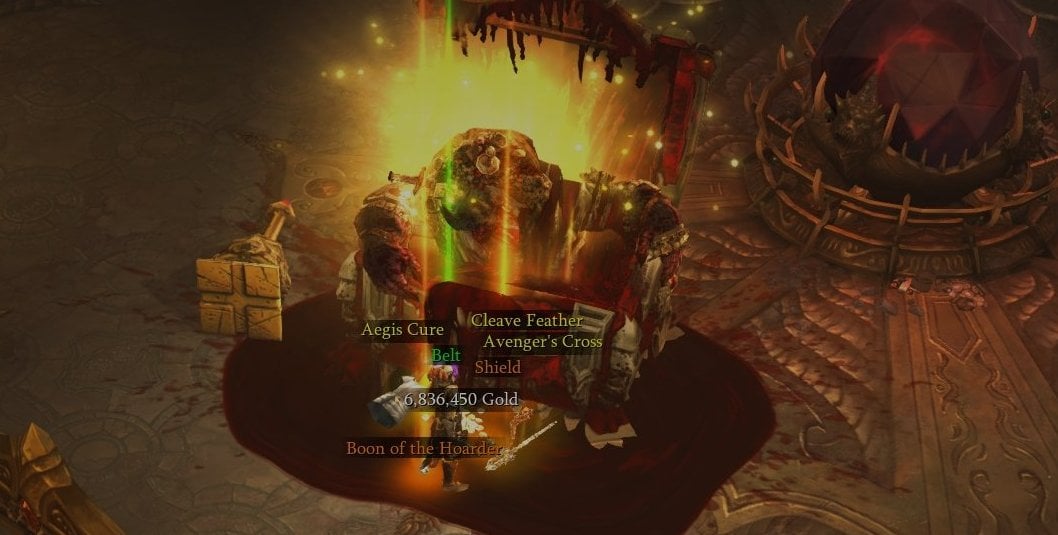 The cube is chaperoned by the extremely trustworthy and not-evil Zoltan Khulle, who sends you to Sescheron to retrieve the artefact. It’s Diablo 3’s equivalent of D2’s Horadric Cube, but they function differently. The Horadric equivalent supported dozens of recipes, while Kanai’s has seven (plus a few secret ones that let you open up a portal to the treasure goblin world). A lot of the Horadric Cube’s functions, like gem management, have been moved on to artisans in D3, so Kanai’s box has a more focused purpose: to fill holes in your build.

For low-Torment characters the ability to upgrade rares to legendaries is useful if you’re lacking, say, a decent amulet. If you have a pair of identical set items, you can reforge one to help complete the set. Like the smart loot system, and many Diablo 3 updates since launch, Kanai’s Cube accounts for the cruelty of chance. If all you need is a particular set of boots to make your build unstoppable, the cube gives you a structured workaround.

The cube sends you all over the world. Transmutation materials are earned by completing bounties in adventure mode. A bonus chest is available in one of Diablo’s five acts, but if you beat all five bounties and claim the chest, the bonus moves to a different act. This elegantly discourages players from running the same farming routes. I’ve returned to zones I had almost forgotten, and in addition to the new zone, it makes the game seem fresh again.

A few of Diablo 3’s more grind-heavy activities have been reformed. Keywardens now drop completed infernal machines, which makes the quest for a Hellfire ring markedly less arduous. The rift system has been refreshed to let you run more rifts, which is great. The randomised monster hordes and zones are extremely fun to conquer, and a great way to measure your hero’s killing power in certain terms. A couple of item drops encouraged me to switch to an Archon wizard build that let me smash my previous records and barge into higher difficulty levels. It’s one of the reasons I haven’t been able to tear myself away from the game since picking it up again last week.

The new zone is nice, too: mournful and quiet, and with a surprisingly beautiful score. The once-proud Barbarian city now plays refuge to hordes of squirming frost maggots, enormous yetis and my personal favourites: the giant rats that are full of smaller rats. Hordes of the little blighters are vomited out of warrens on the mega-rat’s wobbling hunchback. They’re gross, and extremely satisfying to kill.

Diablo 3 is in a really good place, and has benefited greatly from major free updates since the launch of Reaper of Souls. These releases are especially important because they show that Blizzard wants to keep the game around, even as it develops Hearthstone, Heroes of the Storm and Overwatch. In games about building characters over a long time it’s vital to know that the progression curve will continue. We’re all waiting for something—an expansion announcement, perhaps—to guarantee Diablo 3’s longevity, but 2.3 is a good free stop-gap for the meantime.